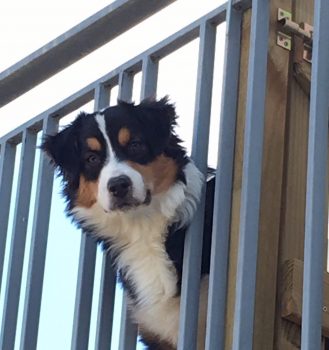 Some historians propose Basques and their sheepdogs from the Pyrenees played an insignificant role in the history of the Australian Shepherd breed. Secondly, Basques did not to go Australia with their «little blue dogs» and then come to the U.S. with boatloads of sheep. Thirdly, the Basque herders came directly to the U.S., and hardly ever brought dogs with them. Most that came did not have sheepherding experience in the old country.

Why, then were the early breeders so persuaded the dogs were mainly Basque derivation? Were they mistaken? Could it be as has been suggested that «the theory of Basque origin probably came about from the understandable assumption by some breeders who obtained their first dogs from Basque sheepherders, that the dogs themselves must be of Basque background, and it makes a romantic picture to envision the Basque sheepherders being followed around the world by «their little blue dogs,» but this picture, nonetheless, is erroneous.» *1

Juanita Ely, a sheep rancher and one of the oldest documented breeders of record affirmed, «The blue Australian Shepherd dogs first came to Australia from the Great Pyrenees on the Spain side as it is a small country with Andorra, a little country lying between Spain and France of only 191 square mile. There isn’t much work for the boys to do so they take their little blue dogs and go into Australia to herd sheep. A lot of these boys are Basque, coming from a region in north Spain.» *2

While we don’t know exactly how many Basque came through Australia. We do know that according to William Douglas, director of the Basque studies program at the University of Nevada; Basque emigration and Australia presents an «obvious enigma.» He asserts that despite the fact that Australia is world-renowned for its sheep industry and Basques were the primary source of sheepherders in America, none engaged in the sheep business in Australia. Among the historical and ecological reasons he cites why Basques failed to gain a foothold in the Australian sheep industry include, the fact that Australia’s best sheep country was monopolized by the earliest British settlers, and the sheep needed little direct care since they were raised on year round permanent pastures (rather than trailed between winter and summer ranges) as they were in the American West. *3

In Australia, sheep were and are grazed on pasture areas year round. They are not moved to different areas except in times of drought. There are no climatic extremes on the continent. Something like 40 percent of Australia has only two seasons, a warm, dry season and a hot, wet season. They have only small areas where they get permanent snow in winter and these areas are not used to any extent for grazing. *4

Despite the fact that a number of Basques who came to the United States were not shepherds in their homeland and didn’t bring dogs. What is not recognized is the detail that a lot of herders were hired with a contract to herd sheep in the western ranches who were shepherds in their homeland. And, when they came to the United States they brought their sheepdogs with them.

This was during the time; the Western Range Association negotiated an agreement with the government of Spain to recruit sheepherders due to the acute labor shortage during W.W. II. «Severe labour shortages in the 1940s led to Public Laws 587 and 307 in 1950 and 1952, respectively, which authorized recruitment of greater numbers of Basque sheepherders (Land & Douglass, 1985). Basques came by the thousands from Spain to Idaho, where they comprised much of the work force in sheep operations.» But, in the mid-1950s, with the return of troops from Korea, Idaho sheepmen lamented that the Immigration Department started sending our Basque herders back to Viscaya and we had to work out an agreement with the Department of Labor to secure H-2 status [for the sheepherders]’ (Shadduck, 1990).» *5

«By the mid-1950s, labour had become a serious problem and, in 1956, Drumheller hired Gregorio Zorroua as foreman who soon hired an exclusively Basque crew of herders and tenders (Washington Wool Growers, 1983). Despite references that insisted that few Basque immigrants had previously worked as sheepherders (Douglas & Bilbao, 1975), sheepmen in Washington State recruited Spanish Basques who had worked with livestock for many years before their arrival in America, including herding sheep for a transhumant outfit that trailed from the arid lowlands to the Pyrenees summer ranges’ (McGregor, 1982). The Drumheller sheep business lasted until the 1970s.» *5

«One of the few legal channels for Spanish immigrants in the twentieth century were contracts for sheepherding, with Basques from northern Spain receiving strong preference by potential employers (Douglass & Bilbao, 1975). Although imports of livestock as well as packing materials and crop seed were strictly regulated (for diseases and contaminants) after the first half of the twentieth century, little attention was paid to wool (R. Westbrooks, pers. Com.) or to the personal possessions of immigrants, such as dogs (J. Kirkelie, pers. Comm..). A retiree in Aragon related that, when he went to California to herd sheep in the early 1970s, sheepherders coming from Spain brought only a few personal items; but in his father’s generation (i.e. during the period immediately after World War II), many of he immigrants brought their herding dogs with them. (A. Oros, pers. Comm.). That herders brought their dogs was corroborated by another interview in which a Basque immigrant and his four brothers all brought their dogs, with sheep fleeces as bedding, when they flew to the US in the 1940s under sheep herding contracts (J. Larranaga, pers. Comm.).» *5

The «little blue dogs,» so to speak were associated with Idaho, the Pacific Northwest and Colorado. Teddy, the little blue Basque dog Juanita Ely got in the 1920s was the first blue dog she had ever seen, but it wasn’t until the time around W. W. II they started showing up in any numbers and ranchers started breeding them in earnest.

The boy, a teenager Juanita acquired her first «little blue dog» from was Andorran, yet he identified himself as Basque. The little country of Andorra is co-ruled by the Princes of Andorra (Bishop of Spain and the President of France). Both Spain and France grazed large flocks of sheep (and goats) on Andorra’s vast mountain pastures each summer. The Spanish owned flocks were tended by Shepherds from the Madriu Valley in the heart of the Pyrenees. Early foundation bloodlines were based on dogs from the Pyrenees Mountains.

«The Pyrenees are not as sharp a divide between France and Spain as they are generally credited with being. At places along the summit of the range it is difficult to judge where the water divide may be. Nor is there a cultural divide; for the Catalans are found in almost equal strength on the two slopes of the eastern portion of the range as are the Basques at the western.» He continues to state, «With pastoral life as a prime element in the existences of both the Spanish and French mountaineers, these pastures are, in summer, the true focus of the local economies. The extent of the pasture rights held by the people is as important to measure of the prosperity of the valley communes as is the amount of cultivated land. Indeed the communes frequently hold privileges upon the pla land in disregard of the national boundaries. The flocks and herds of the two people mix here.» – Roderick Peattie, Geographical Review, 1929. *6

Feo was brought from the Pyrenees to the United States in the 50s by a contract herder. By 1960, our friend, Joe Fernandez had gotten him from Juanita and was using him along with our little Goody (Goodie) in Southern Colorado and Northern New Mexico where he was running several bands of sheep consisting of 3,000 head per band. It was a large operation. *2

Ina Ottinger of Casper, Wyoming, stated that her parents imported two dogs from Spain in 1937. She had the original shipping certificates. She continued breeding that line of Wyoming ranch dogs into the middle seventies. She also acquired a little red merle male that looked just like Las Rocosa Sydney that was brought to the United States by a Basque sheep shearer during the World’s Fair in Seattle. When the herder left to go back home he couldn’t take the dog with him so she bought him. Some of the offspring are found in pedigrees as Wyoming Ranch dogs. *2

Unfortunately, as we’ve explained before, under the old registry system, each time that a dog changed ownership, the previous owner’s name was deleted and the new owner’s name entered as the prefix to the dog’s name. That part of history becomes obscured. Take Ely’s Spike for example. On some pedigrees, Ely’s Spike is listed as being sired by Sisler’s Spike, when in fact; Sisler’s Spike and Ely’s Spike are one in the same. Juanita got Spike from Gene Sisler (Jay’s brother). Spike’s sire and dam are listed as «Unknown.» The old-timers may not have known the name of the sire and dam, but they knew where they came from.

Spike came to this country from the Pyrenees Mountains with a Basque herder. Spike had a harsh coat very much like the dog pictured with the sheepherder on the Drumheller ranch on page 32 in The Total Australian Shepherd: Beyond the Beginning. There are many, many others like that.

Sometimes when the dog changed hands it became foundation registered by a totally different name with «Unknown» ancestry. This activity all took place in the early years from the 1940s to the 1960s when the foundation dogs were first being registered as a breed. Even though their names appear in pedigrees, many of the early dogs weren’t registered. They had already lived and died.

Eyewitness accounts provide a context or framework for Australian Shepherd history. Regardless of which theories researchers subscribe to, you cannot ignore the oral histories of the early breeders which have been confirmed by independent sources. Even though they are not recorded on paper it doesn’t mean the accounts didn’t happen or that they didn’t play a primary role in shaping the breed.

The pioneer breeders were not dog people. They were sheep ranchers whose livelihoods depended on the dogs. The dogs were an essential tool, but not the focus of the operation. The ranchers didn’t care what color they were or if the dogs came from Spain, Timbuktu or Australia. There were unique qualities associated with the little Basque dogs that didn’t exist in the breeds available at the time or they wouldn’t have searched them out.

The foundation breeders had no motive to exaggerate the story, but every reason to convey the facts as they were because without the particulars, the opportunity to find root stock would be greatly decreased. This had nothing to do with creating a romantic breed history. Remember at that time there was no association or registry. History doesn’t change it simply needs to be rediscovered.